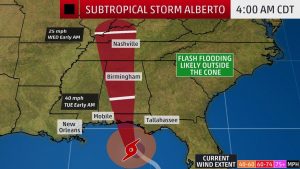 Monday, May 28, 2018–In a press release from yesterday, Sunday, May 27, 2018, Noble Public Adjusting Group revealed that Florida declared a state of emergency in the wake of the subtropical storm Alberto. Now Alberto has strengthened as it approaches the northern Gulf Coast, bringing a threat of flash flooding, rip currents, gusty winds, coastal flooding and tornadoes to the southeastern United States this Memorial Day weekend, with the center of the storm likely making landfall along the Florida Panhandle Monday afternoon or evening.

Alberto’s appearance is becoming more typical of what a tropical system is expected to look like, as clouds and thunderstorms are beginning to wrap counterclockwise on the southern and eastern sides of Alberto’s center of circulation. But a wedge of dry air has also begun to wrap around Alberto’s core, which has hampered quicker development. Tropical-storm-force winds currently extend outward up to 105 miles from the center of circulation. Some of the strongest wind gusts in Florida so far include St. Petersburg (39 mph), Tampa (37 mph) and Sarasota (35 mph).

Regardless of what this system is called by meteorologists, the main threat from Alberto will be heavy rain and flash flooding that could last well into the week ahead. Slow-moving tropical or subtropical storms are notorious heavy rain producers, and that will be the case with Alberto. A broad area of 4 to 8 inches of rain is likely from the Florida Panhandle inland to Alabama and western Georgia. Isolated storm totals up to 12 inches are possible in this area. This slow moving tropical storm and the heavy, persistent rain will likely cause flash flooding in the Florida Panhandle. The high winds and other circumstances of Alberto are also the perfect settings for the chance of tornadoes.

Noble Public Adjusting Group stands ready to help policyholders in the Florida Panhandle or any other area of the US that is affected by subtropical storm Alberto. Whether a homeowner or a commercial property owner, Noble can file your insurance claim for damages received as a result of this storm. Especially during times like these, when insurance companies will be inundated with insurance claims, having a public adjuster on your side just makes good sense. History has shown that when a tropical storm or hurricane hits the Florida Panhandle,  often times insurance companies are so overwhelmed with claims, they send staff adjusters from other states who do not know about property values in our area.

If you would like one of Noble’s professional public adjusters to go over your insurance policy with you for free, call us today. We offer this complimentary service as a way of showing our concern for policyholders, to help them make sure they have the proper coverage for their home or business property. If you experience damage as a result of what is currently considered a subtropical storm but can easily switch to a full-blown hurricane, let Noble be the one to file your claim. Once you hire Noble, we take over everything from that point on, including filing your insurance claim and staying in constant contact with your insurance provider until you receive the proper settlement. There is no upfront charge to hire Noble Public Adjusting Group. We don’t get paid until you do.

Noble’s home office is in Panama City Beach, but as the #1 insurance appraiser in the nation, we can handle an insurance claim anywhere in the US.