Hawaii Volcanoes: How a Public Adjuster Can Get Insurance to Pay

If you keep up with current events at all, then you know about the massive damages and evacuations that are occurring in Hawaii due to erupting volcanoes. The eruption has destroyed about two dozen homes in the Leilani Estates subdivision on the Big Island. On Monday, another fissure spewing lava and toxic gas opened up, and a crack in the earth that emerged a day earlier was sending molten rock crawling toward the ocean, officials said. Nearly 20 fissures have opened since the Kilauea volcano started erupting 12 days ago, and officials warn it may soon blow its top with a massive steam eruption that would shoot boulders and ash miles into the sky.

Noble Public Adjusting Group is blogging about this today because we see how important it is that our readers understand all the variables when it comes to volcanoes and insurance. Since a standard insurance policy does not cover volcanoes, the people of Hawaii will instantly assume that their insurance policy will not cover the damages they receive. But the truth is, by using a public adjuster to handle filing your insurance claim in Hawaii, you have opened the door to the possibility of winning a settlement, in spite of the lack of volcano insurance.

Hawaii Volcanoes: How a Public Adjuster Can Get Insurance to Pay 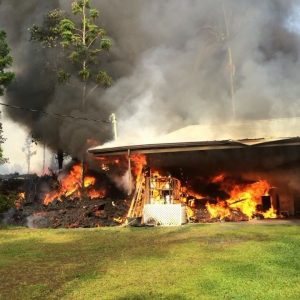 An important distinction of a homeowner insurance policy is that is DOES cover fire damage, and that is one of Noble’s main specialties, fire loss. The current volcano eruptions in Hawaii are causing fires everywhere, so if you have lost your home or commercial property due to a fire directly caused by the erupting volcanoes, you do have a valid insurance claim.

It may sound absurd, but this statement from an article at Yahoo Finance states that “As odd as it might sound, the best case scenario of a worst case situation for affected homeowners is for the lava to burn the house down. That could trigger the fire coverage of a normal home owner’s policy.”

If you are a resident of Hawaii and have come across this blog post, first let us say thank you for reading! Our hearts truly to go out to you and the other people of Hawaii who are going through this disastrous event.  If would like to discuss how Noble can help get your insurance company to pay, even though there is no such thing as volcano insurance, please give us a call. One of our professional public adjusters will be able to answer any questions you might have, and help you with your insurance claim in Hawaii. Noble Public Adjusting Group’s main office is in Panama City Beach, in the Florida Panhandle, but as the #1 insurance appraiser in the US, Noble can handle a claim anywhere in the US, including Hawaii.

Call today. It might be the most important phone call you ever make.