There is nothing quite as aggravating as a water leak in your home, the constant drip you keep putting off, swearing to get it fixed soon. However, as the image below shows, you are losing money with every single drip. And what is worse is when there is a leak you don’t see or hear. That is the one that can drain your pocketbooks really quick, since your first sign of a hidden water leak may only be a far bigger water bill. For Florida Panhandle homeowners who are experiencing a water leak, just know that the team at Noble Public Adjusting Group can help you get the problem solved in a jiffy. Our friends at Panama City Beach Plumbers are consummate professionals, honest people and they cover all of the Florida Panhandle.

Now that we have suggested someone to help fix your water leak at your Florida Panhandle home, Noble wants to address an issue that we see repeatedly. Experience has shown us that your insurance claim may very well be denied if the water damage you are claiming is caused by a leak. Insurance companies are always on the lookout for ways to deny claims. That may sound surprising, but it is the truth. Why do you think insurance is one of the most profitable businesses in the US? It sure isn’t because they are constantly approving claims and making fair settlements.

Once the homeowner hired us, Noble did a thorough investigation to determine the true cause and origin of the damage. This required the use of specialized technology. Noble Public Adjusting Group used our state-of-the-art moisture meters and thermographic imaging. 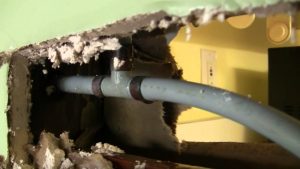 What we discovered was that the homeowner was unaware that a pipe was leaking behind a wall. The first evidence of the leak, which ended up damaging the walls and floor, appeared as water stains on the drywall. The insurance company’s excuse for denial was that the pipe in the wall had been leaking for a long period of time. As this loss was not deemed sudden and accidental and occurred over a period of time, the insurance company denied the claim.

As public adjusters who had seen this very thing before, we instantly recognized the problem with that denial. The insurance company was applying an exclusion that does not exist. No part of the policy required water damage from a leaking pipe to be ‘sudden and accidental.’ The exclusionary wording of the policy also allowed for some length of time for someone to discover leakage. Since the exclusion is ambiguous about the length of time water must leak before the exclusion applies, that lays the burden of proof on the insurance company, who must prove when the leak started, which of course they couldn’t do.

Further proof that the leak didn’t have to be ‘sudden’ was in the Named Perils coverage under Coverage C of the Florida Panhandle homeowner’s insurance policy.  Even the named perils section of the policy extended coverage for water discharged accidentally—with no requirement of ‘suddenly.’ It would be unreasonable for a named peril coverage to be broader than an ‘open peril’ coverage.

We were able to reopen the Florida Panhandle homeowner’s insurance claim and reverse the denial. They were paid a fair settlement for the water damage caused by a leak. Noble Public Adjusting Group can do the same thing for you. If you have had an insurance claim denied, for whatever reason, let us take a look at it and see if we can reopen your claim. As you can see, we think outside the box and that gets things done.

Call us today to discuss your problem claim for water damage, or any other concerns you may have. We love hearing from our blog readers!