On February 22, 2018, Noble Public Adjusting Group was the Presenting Sponsor at the 2018 Panama City Beach Chamber of Commerce Awards Dinner. 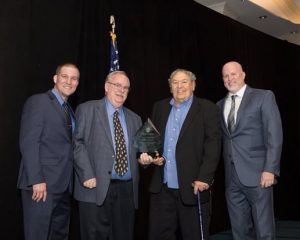 This year’s awards dinner honored 6 outstanding Panama City Beach Chamber members. The event was held at the Edgewater Beach & Golf Resort in Panama City Beach, who was the Premier Sponsor. The Platinum Sponsors were United Way of Northwest Florida and REEDS Jewelers, and the Photobooth Sponsor was People’s First Insurance.

Noble Public Adjusting Group is a long-time and active member of the Panama City Beach Chamber of Commerce. Bo and Heather Williamson, owners of Noble, had a wonderful time at this year’s awards dinner. Noble was happy to pass the crown for “Business of the Year” that they won in 2017. Noble has been honored by the Panama City Beach Chamber of Commerce many times. They won the Chamber’s Business of the Quarter title in 2017 and in 2016.

This year’s Panama City Beach Awards Dinner held on February 22, 2108, was a prestigious event that recognized local citizens for their dedication and accomplishments in both the community and the Beach Chamber. These awards included the Pioneer of the Year, Humanitarian of the Year, Ambassador of the Year, Business Excellence Award, Young Professional of the Year, and a dedication to the Chamber’s 2017 Chairman.

The Past Chairman’s Award honored 2017 Chairman of the Board, Ryan Davis of Capital City Bank, for his dedicated service and commitment to leading the Beach Chamber.

This year’s Young Professional of the Year Award went to the Commercial Lines Producer of Peoples First Insurance, Maria Wilson, whose commitment to her role as a young professional in the Panama City Beach community has made a difference in the Beach Chamber.

This year’s Ambassador of the Year Award winner was Jeremy Hinton of Innovations Federal Credit Union. Whether it is representing the Beach Chamber at Ribbon Cuttings and Grand Openings, or attending Chamber networking events, Jeremy goes above and beyond as an Ambassador. He is a valuable asset to not only the Beach Chamber, but also the community.

Larry Thompson of Grand Slam Sports Tournaments won the Business Excellence Award for his outstanding performance through growth and contributions to both the community and the Beach Chamber.

The Humanitarian of the Year award was given to Ric and Bobbie Brigman with Food4Kidz for their generosity and commitment to helping those less privileged in our community, especially children.

A Pioneer initiates, takes the lead, prepares the way, and participates in the development of a region. This year’s Pioneer of the Year Award was given to Bill “Pine” Buskell of Pineapple Willy’s and Wicked Wheel, whose contributions to the community of Panama City Beach has helped accomplish much success in our area.

Below is an image of Bo and Heather Williamson clowning around in the photo booth. 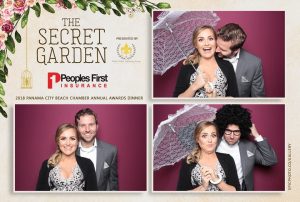 The theme of this year’s awards dinner was ‘The Secret Garden.” As you can see, the owners of Noble Public Adjusting Group do really know how to have a good time and not always take themselves so seriously.

But one thing Bo, Heather, and the Noble Public Adjusting Group does take very seriously is handling insurance claims for policyholders in Panama City Beach and beyond.

If you discovered this blog post while searching for the best public adjuster in Florida, don’t hesitate to give Noble a call today. We can handle your insurance claim anywhere in Florida and the US.