With the recent microburst in Destin and the high winds we have experienced, which caused some damage, Destin residents realize how lucky we are to have gotten off this easy. Our thoughts naturally turn to the devastation wrought by tornadoes in Alabama last week. 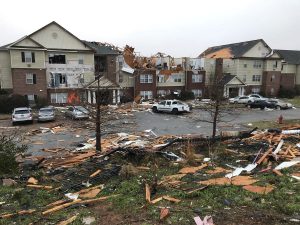 Noble Public Adjusting Group’s team can only shake our heads in consternation. Why? Because as a company that cares so much about policyholders, we can’t for the life of us figure out why Alabama does not license public adjusters. Read this statement and you will shake your head too. “Alabama’s State Bar Association said, “Alabama does not license claims adjusters so any claims settled by such third party recovery firms are considered to be the unauthorized practice of law which is subject to criminal prosecution.”

The quote above comes from this article in Claims Journal. The article was written after a total of 64 tornadoes in 2011 caused over $1.5 billion in damages in Alabama, but still, the state refuses to license public adjusters. And the most bewildering thing is that the state of Alabama states no specific reason for this refusal.

Brian Goodman, legal counsel for the National Association of Public Insurance Adjusters (NAPIA), says the association, comprised of 600 individual members, is behind creating licensing requirements in Alabama. “It creates more chaos when you don’t have licensing,” says Goodman. The denial of licenses for public adjusters causes major issues for Alabama insurance policyholders. It creates a perfect atmosphere for unlicensed adjusters to prey on naive homeowners and business property owners and has caused many instances where contractors take advantage of policyholders during a catastrophic event. The policyholder can’t know whether a contractor is legitimate or a shady character.

Gene Veno, president of the American Association of Public Insurance Adjusters (AAPIA), reiterates the contractor issue. “There is a problem nationwide with non-licensed public adjusters, some of whom are contractors, who prey on homeowners to solicit insurance claims in the areas of hailstorm damage or other roofing and siding issues, especially after a catastrophic loss,” says Veno.

In other words, Alabama residents are once again, after the latest round of tornadoes and the devastation they wrought, being shortchanged. What is really aggravating is that a bill was presented in 2011, requesting the state of Alabama license public adjusters, but it failed. The same thing happened in 2016. Not only is this leaving Alabama residents at the mercy of unscrupulous contractors, there is no one to help them fight their insurance company if the settlement proposed as a loss payment is smaller than they know it should be, or their claim is outright denied.

However, there is a workaround that can solve this issue. An Alabama insurance policyholder can invoke the “appraisal provision” of your policy and name Noble Public Adjusting Group as your appraiser. There is no prohibition of that process in any state. As a matter of fact, it’s written into all insurance policies by insurance companies that do business in Alabama. Noble Public Adjusting Group just happens to be the #1 insurance appraiser in the nation. So there you go! Until Alabama gets its ducks in a row, Noble can still work to help policyholders in that state receive the proper compensation after a loss and have a defender on their side. Also, when it comes to contractors with questionable ethics or work history, Noble can help with that too. We have a vetted list of Alabama contractors we can suggest, trustworthy people who do great work.

If you are an Alabama homeowner or commercial property owner who experienced a loss due to the latest round of tornadoes in your state, call us today and let’s talk. It may be the most important phone call you ever make.