Pensacola F3 Tornado Update; in the wake of disaster

The tornado that ripped through Pensacola was no “run of the mill” storm.  It was classified as an F2 and then upgraded to an F3.  Governor Rick Scott declared Escambia County as a state of emergency as people fled from what was left of their homes to stay with relatives, friends and in shelters.  There were thousands of homes without power the night the storm hit, and nearly one hundred families left with “total losses”.  In insurance a “total loss” is declared when the property that is insured is damaged beyond repair. 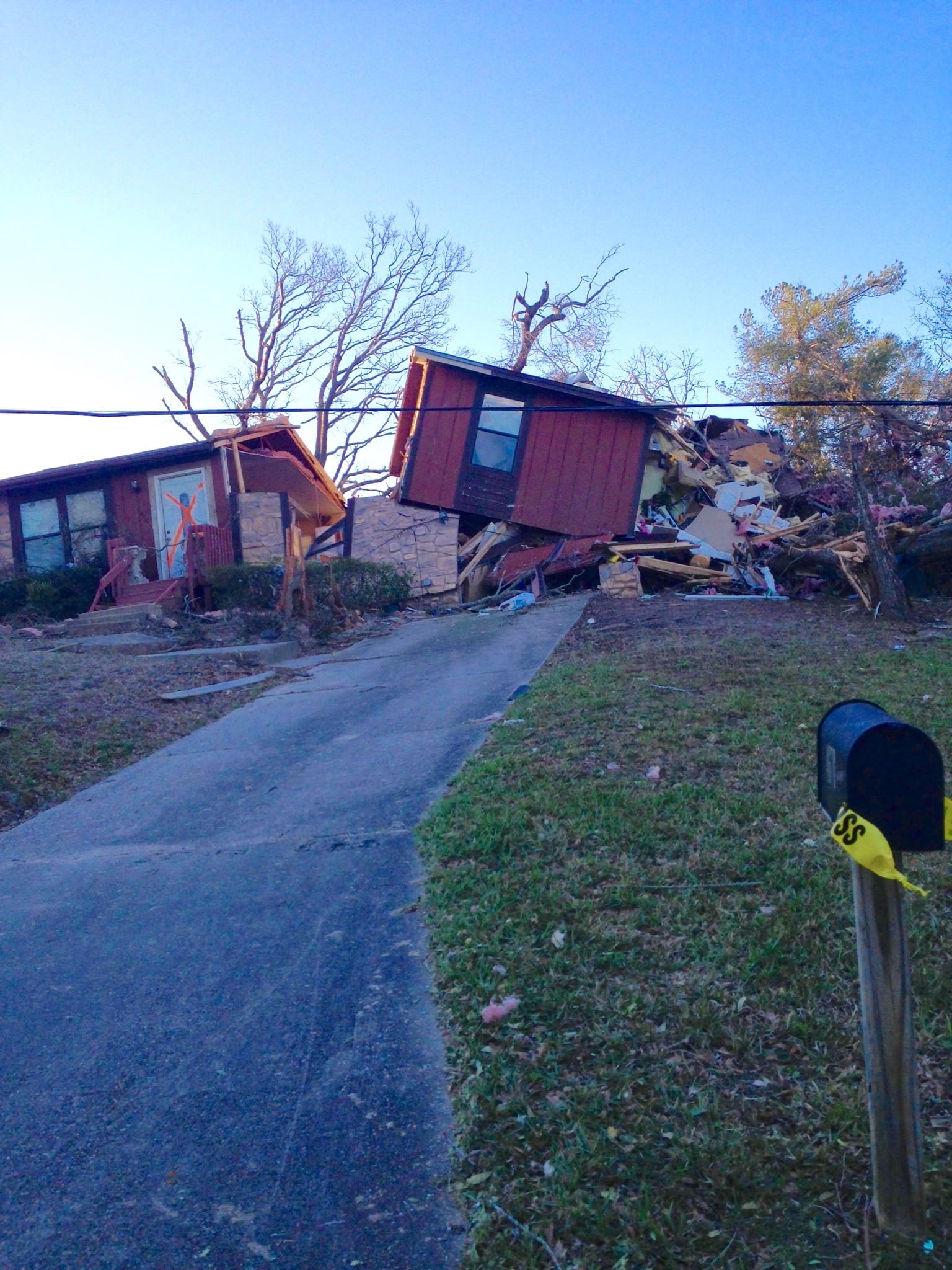 Even when someone has a great insurance policy with contractual obligation to replace everything and make it all brand new, there are so many things that cannot be replaced; pictures, cards, items passed down by family or friends and much more as you can imagine.

We at Noble Public Adjusting Group were in Pensacola as soon as the roads were opened back up, to offer help to the residents of Escambia county, but what we found was nothing short of heart warming.  People were already there.  Not the organized catastrophe relief teams that you might be thinking of, but regular kind-hearted individuals who just wanted to help.  Some of these “Good Samaritans” were featured on the news, others refusing any glory were captured in pictures from a distance and shared across Facebook and some received no recognition at all, from the public.  Church groups from various Christian churches were out offering a hand to anyone who would take it. 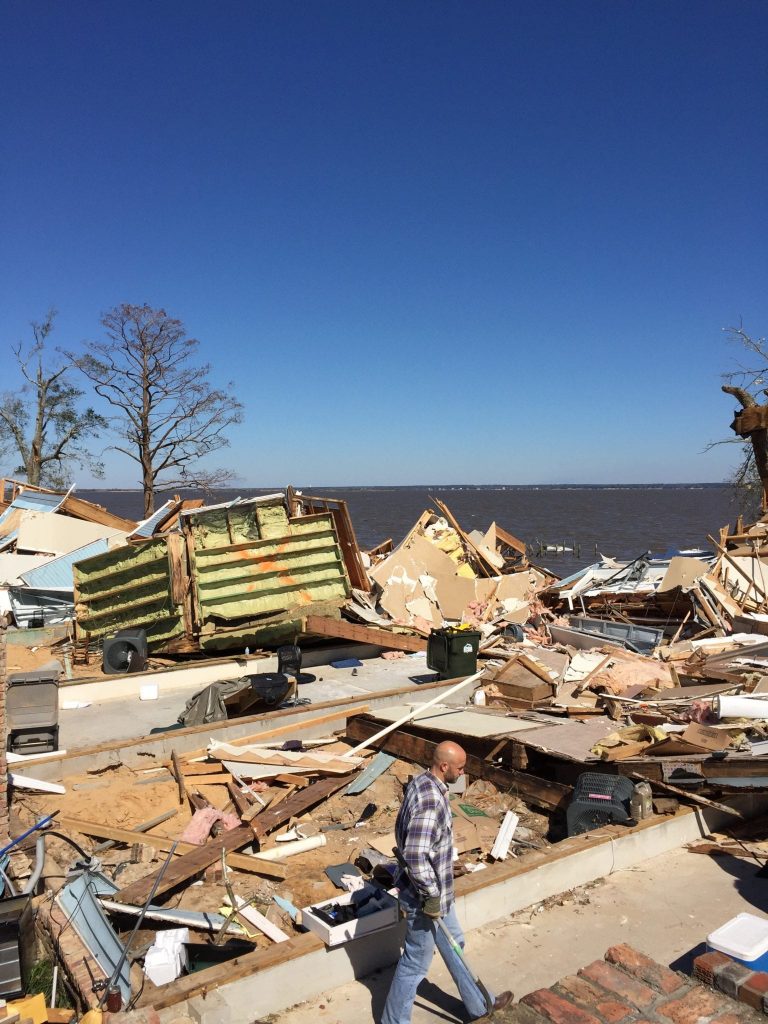 “Even though the devastation is obviously terrible, it’s amazing to see how something like this brings out the best in people.  Everyone just wants to help each other.” said Bo Williamson, the owner of Noble, after spending the day in Pensacola last Friday.

653 properties suffered damage, ranging from a few missing roof shingles to unrecognizable piles of rubble that use to be homes.  A lot of people are still displaced; without places to go.  Some are renting campers, some staying in hotel rooms and others are sleeping on the couches and floors of kind strangers.  A great deal of people also lost their vehicles to the storm, adding lack of transportation to the long list of inconveniences.  It’s just a sad state of affairs when a catastrophe of this proportion hits, but despite it all, people are hopeful.  There are lots of smiles, great attitudes and limitless hugs being exchanged on the scene in Pensacola.

Pictured below on the right, is a young lady who was affected by the storm and yet she smiles as we talk with her about her experience, surrounded by downed trees and tornado debris. 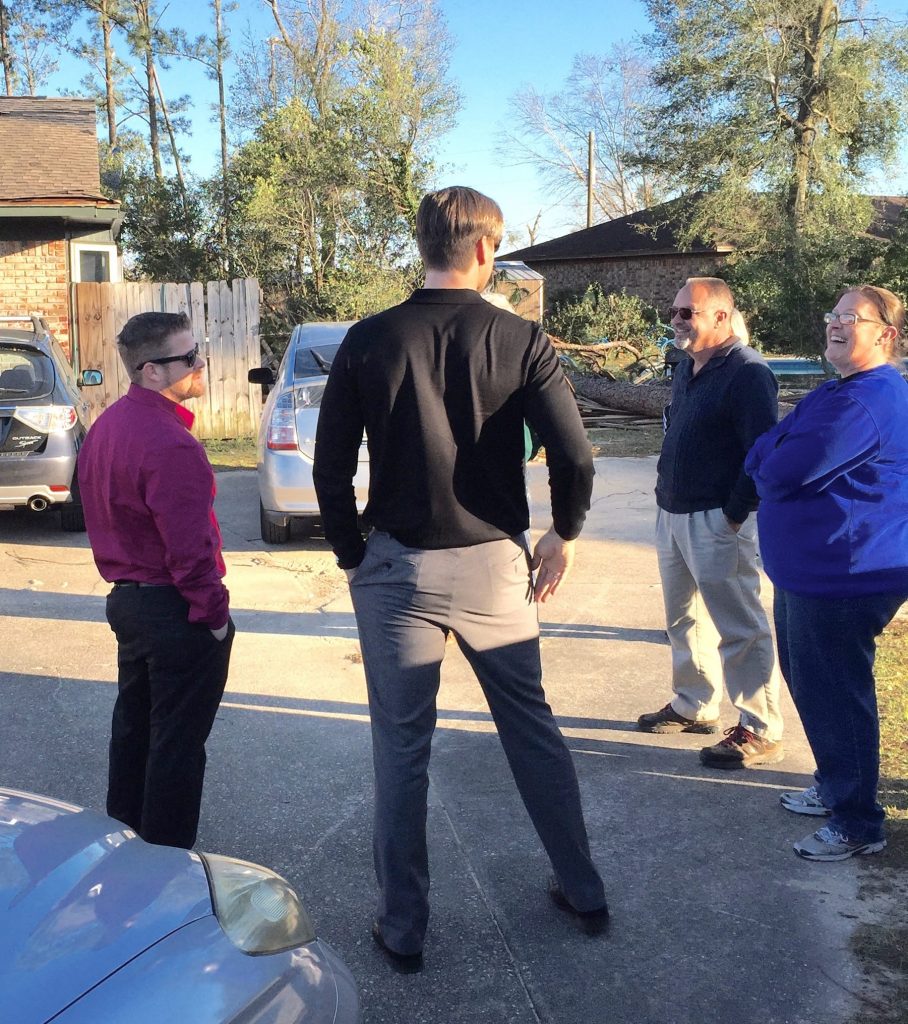 In the midst of absolute disaster, my very favorite story from our time in Pensacola was a giant pile of debris, which was the remains of someone’s home, with a sign placed directly in front of it that said “God is still in Control”.

If you or anyone you know has experienced property damage because of the storm that passed through Escambia County on February 18, 2016, please call Noble Public Adjusting Group right away.  Times like these can be very confusing and Insurance Companies like to move swiftly.  Most of the time that leaves property owners with a bad after-taste because so many things were missed and un-accounted for.  We increase insurance payouts by an average of 747%.  Don’t file this claim alone, we can help.  For more information visit nobleresto.asqhost.com or call (850)249-6972. 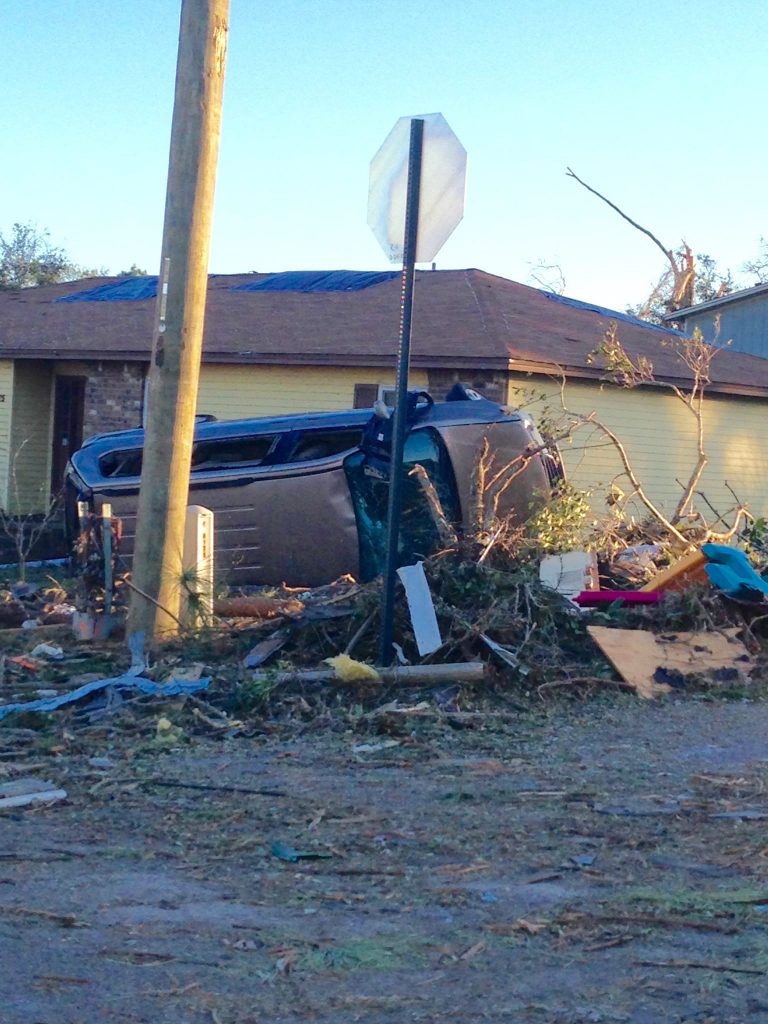 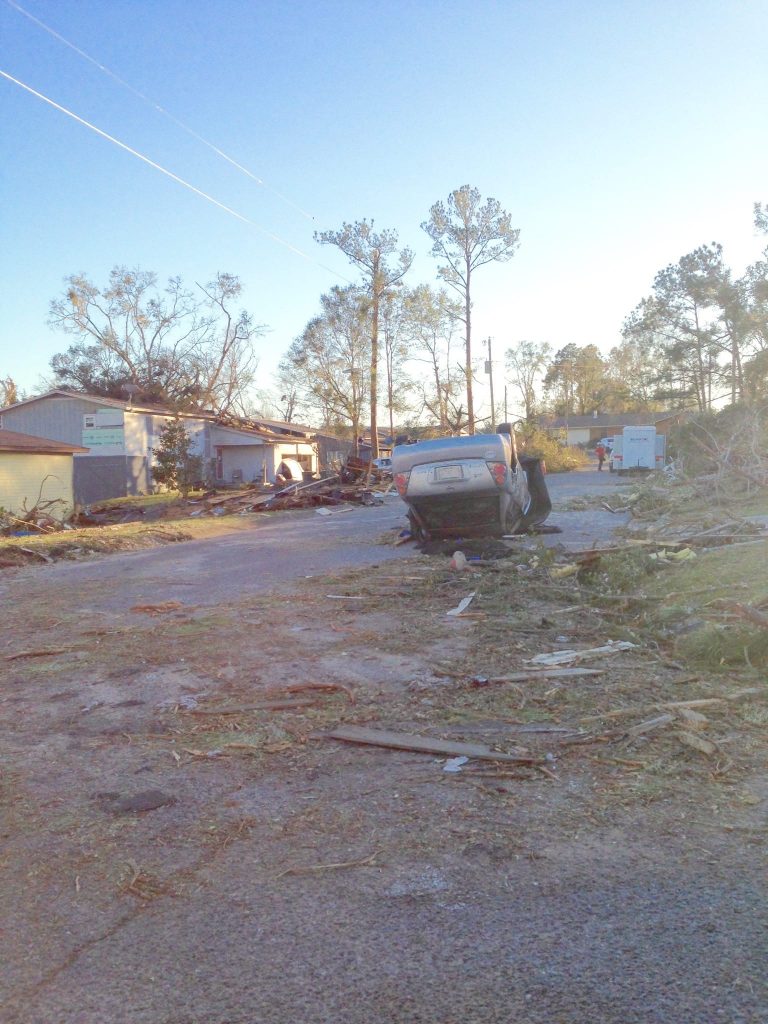 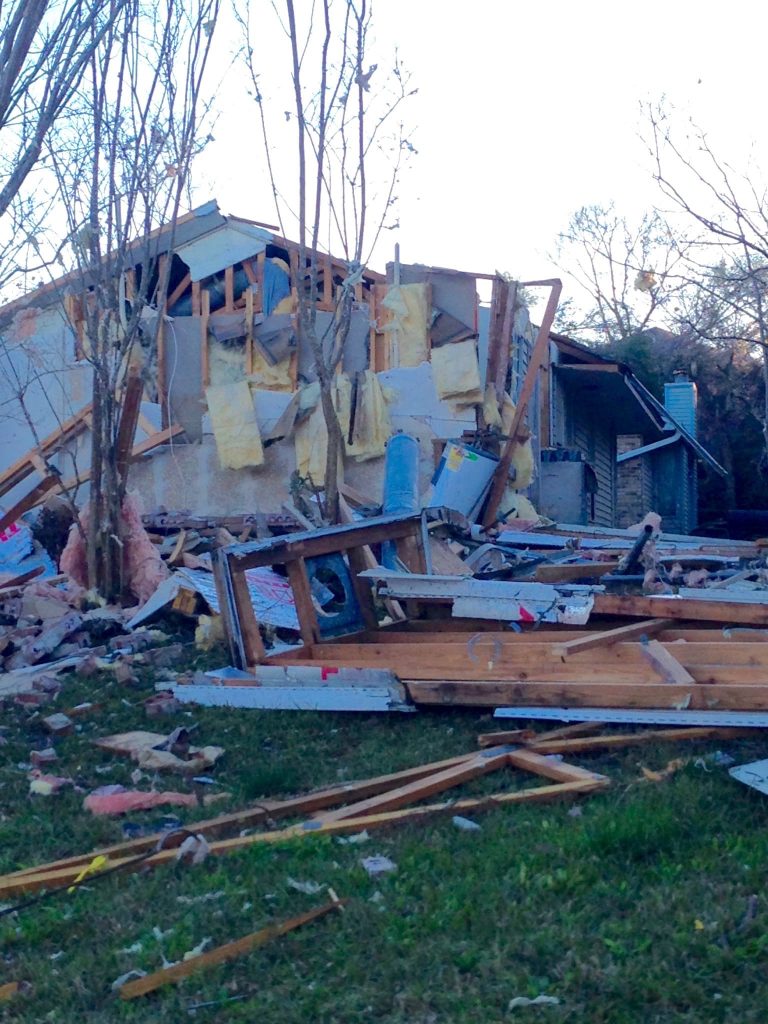 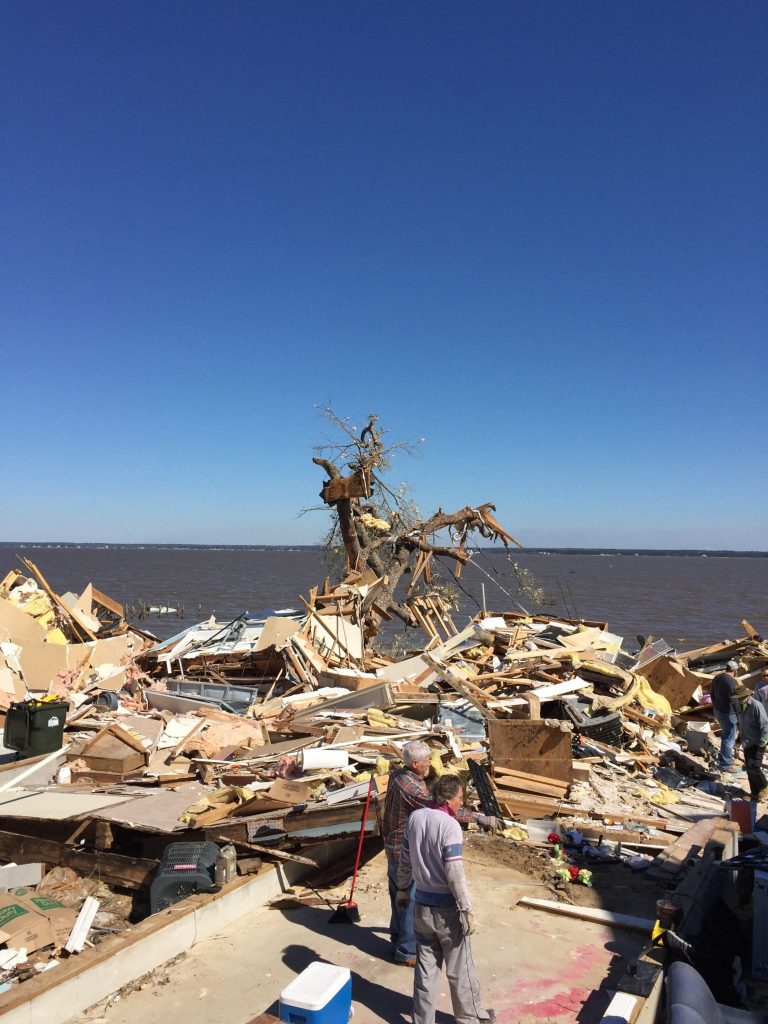